Algae saved our planet by transforming our atmosphere to oxygen, allowing life to exist. Algae saved us again by providing the Earth’s first food. Might algae save our planet yet again?

Early Earth supported neither living creatures nor food. About 3.7 billion years ago, no life existed because the Earth’s surface was too hot and there was no oxygen. The Earth’s atmosphere was composed of a blanket of deadly and heat trapping CO2 and methane gas.

Fossil records show that a tiny plant emerged in the primordial soup and did an extraordinary thing. The plant absorbed the sun’s energy and used a chemical reaction, photosynthesis, to split a CO2 and a water molecule. The tiny plant converted the carbon atom into a high-energy green plant bond, a hydrocarbon, by taking two hydrogen atoms from H2O and released the oxygen molecule to the atmosphere. Algae had begun its work to change the atmosphere. 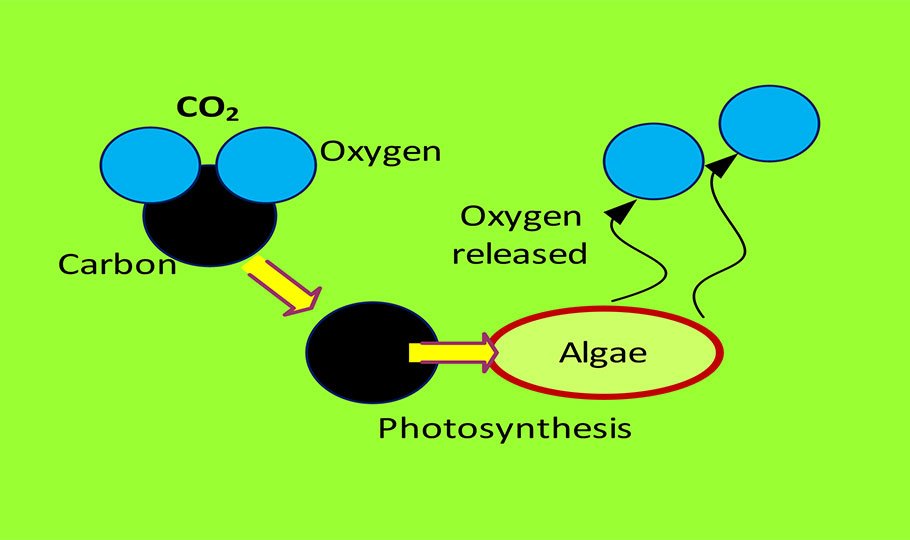 Algae Converts CO2 to a Plant Bond and releases O2

Abiogenesis, the study of how life on earth emerged, uses a primordial soup theory and suggests the chemical conditions on Earth created the essential building blocks of life. While debate continues on exactly how the first life was synthesized, fossils suggest the first plant cell, cyanobacteria, also known as blue-green algae, was the size of a nano-particle, 5 µ (microns). The period at the end of this sentence is about 500 µ.

Algae systematically collected solar energy, sequestered carbon atoms and released oxygen. Moving at the incredibly slow rate of one tiny molecule at a time, algae transformed the harsh carbon dioxide atmosphere that could not sustain life to an oxygen atmosphere that supported life. Algae took another 3 billion years to create sufficient oxygen to support other forms of life because land plants evolved from algae only about 500 million years ago.

Algae’s atmospheric transformation enabled the development of other water plants, fish, insects, land plants, amphibians, reptiles and eventually land animals. Even though microalgae are the tiniest plants on our planet, each day algae create 70% of the atmospheric oxygen, more than all the forest and fields combined.

Algae’s contribution to our oxygen-rich atmosphere is matched by this tiny plant’s other gift — serving as the base of the food chain. Many of the earliest plants and water creatures depended on algae as a food source. Algae serve as nutritious food for everything from the tiniest phytoplankton to the largest mammal on earth, the great blue whale, because the plant offers an excellent set of proteins, minerals and vitamins. Every day, while algae captures CO2 and releases pure oxygen, the green biomass supplies food for 100 times more organisms than any other food source on Earth.

The brutal conditions on Earth meant the first algae cells had to evolve and re-evolve millions of times as their microenvironments crashed with electrical storms and severe heat followed by freezes and meteor showers of super-heated rocks. Algae displayed incredible persistence and developed a wide variety of defense mechanisms that allowed the plants to survive and to propagate. Algae’s ability to adapt quickly in order to survive led to an estimated 10 million algal species, each with unique growth capabilities and biomass composition.

Since algae formed the lowest rung on the food chain, they developed a brilliant survival strategy — the ability to grow faster than its predators could eat. The herbivores that fed on algae ate many but not all of the fast growing plants. The ability to propagate faster than its predators could devour them created a tremendous competitive advantage and ensured algae’s survival. Algae may have been the first free lunch because many species developed the capacity to double their biomass before midday. A single algal cell may create a million offspring in a day.

Algae blooms were common in ancient oceans, lakes and ponds. The fossil fuels we burn today are made up mostly of fossilized algae. Children are taught in school that crude oil comes from dinosaurs but dinosaurs roamed the earth about 200 million years too late to become the biomass of choice for fossil fuels.

Most species of algae are so tiny they are visible only under a microscope. However, algae may group, bunch, cluster or grow in formations that are visible and edible. Algae typically are heavier than water and settle, creating a layer of green snow on the bottom of a pond. Algae’s green solar energy fuels growth for trillions of organisms daily as algae’s stored energy moves up the food chain.

Marine algae called seaweeds or macroalgae often grow into forms that have the appearance of land plants with pseudo roots, trunks and leaves. This parallel evolution enables marine algae to grow to sizes as large as trees. Macroalgae are often eaten directly by fish and mammals such as sea otters, manatees, dolphins and whales. Macroalgae provide a variety of bright colors for the oceans and far more biomass than herbivores can eat.

Algae grow in forests under the polar ice caps, in soils under glaciers, in the hottest and driest deserts as well as in pools, aquariums and water ways. Algae’s simplicity enables these plants to be incredibly robust; they not only survive but produce high-value biomass in extremely tough environments. The toughest environments existing on Earth today probably seem tame to a plant that survived the harsh environmental conditions billions of years ago.

Algae use plentiful and often surplus inputs, including sunshine, CO2, and waste, brine or ocean water. Algae photosynthesis strips CO2 and nutrients from the surrounding water and produces plant biomass made up of various forms of lipids (oils), protein and carbohydrates. The process releases considerable pure oxygen to the atmosphere.

Algae serve as a major food source for many organisms in natural settings with no human cultivation. Wild algae growing in natural settings produce incredibly fast biomass growth but are neither reliable nor sustainable because production typically crashes due to either nutrient limitation or predator attack. Cultivating algae in ponds, troughs or containers enables significant productivity improvements over wild algae because sufficient nutrients can be provided and predators managed or avoided.

The most common nutrient limitation in natural settings occurs from carbon, nitrogen or phosphorus. Inorganic nutrients, such as nitrogen, are available only to the degree that they are available as free ions, diluted in the water. However, algae can quickly consume the available ions in natural settings such as lagoons. Again, algae adapted strategically, and many species have the ability to consume organic nutrients from biological biomass or other waste.

Humble algae saved our planet by sequestering two pounds of CO2 in every pound of algal biomass. Today, our atmosphere and oceans carry massive amounts of CO2 from human caused fossil fuel pollution. Algae may play a role in saving our planet again by reducing the atmospheric carbon load. Algae can also reduce greenhouse gases by producing carbon-neutral liquid transportation fuels that recycle atmospheric carbon while displacing fossil transportation fuels. Carbon neutral fuels are made with algae feedstock when the cultivation, harvest and refining energy comes from renewable sources such as solar, wind, waves, geothermal or algal oil.

Algal fuels offer a significant advantage in that they burn cleanly, without black soot particulates. The black soot pollution that causes lung disease, respiratory illness and cancer came from the fossilization of algae into crude oil, coal and shale over 400 million years. Algal fuels are produced in a matter of weeks and are not fossilized, so they burn clean similar to their land-based cousins — vegetable oil.

Algae promise to provide much-needed solutions for our increasingly hot, crowded, hungry and energy consumptive societies. The opportunity before us is to cultivate algae in a manner that engages people globally to produce sustainable and affordable food and energy for their family and community needs locally.